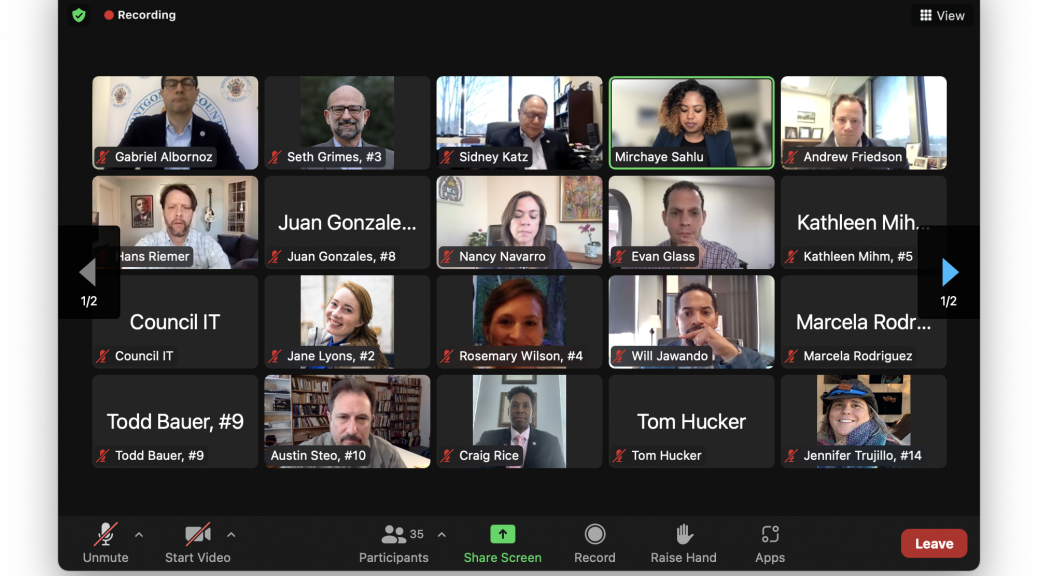 Recognizing that the six-year Capital Improvement Program (CIP) proposal covers a variety of worthy but competing spending priorities, I will focus my advocacy on bus rapid transit (BRT) and affordable housing. I support spending in both areas and regret only that the county executive has not proposed a greater amount for affordable housing.

Veirs Mill Road and MD355 are priority Bus Rapid Transit (BRT) corridors. Veirs Mill Road service will provide a much-needed higher-speed, roughly east-west transit option to a significant number of minority and low-income riders. It will connect housing and employment centers, reducing congestion and – particularly with bus system electrification – the environmental impact of getting around Montgomery County, as will the MD355 route. As a bus rider myself – but more important, as an environmental and equity advocate – I support full CIP funding of these BRT routes.

I will add two points: Current plans would have a significant segment of the MD355 service operate in mixed traffic, rather than in dedicated lanes, and there’s no guarantee that the Veirs Mill Road service will have dedicated bus lanes. We won’t have true bus rapid transit without dedicated bus lanes. Also, please keep Ride On fare-free through the entirety of the network, to better support riders who are struggling financially, grow ridership, speed trips, and boost operator safety by eliminating fare collection.

Please see whether you can find additional funds for affordable housing, without taking funds from school, park, and other investments, and complement our affordable-housing support with zoning and land-use reforms that will encourage property-owner and developer creation of new housing without county capital investment. I urge you to bring Thrive 2050 to a vote and advance the zoning reforms that we all know are needed.

I wrote a letter on behalf of the Silver Spring Justice Coalition and recruited cosponsors, calling for cancelation of a request for proposals for Montgomery County FLASH bus service traffic enforcement. We call for “an immediate end to police referral of fare evasions that are not accompanied by violent crime or the threat of violent crime. As soon as feasible, we also call for free bus service for all riders, building on existing free and reduced-fare programs.” Our message is below and also posted on the SSJC Web site.

Silver Spring Justice Coalition and the additional undersigned partners call for the cancellation of this solicitation and for reform of Montgomery County’s Transit Services fare policy, including an immediate end to police referral of fare evasions that are not accompanied by violent crime or the threat of violent crime. As soon as feasible, we also call for free bus service for all riders, building on existing free and reduced-fare programs. The reasons are as follows:

By contrast, free FLASH service (and making Ride On service free permanently) would have a host of benefits. It would boost ridership and lead to fewer cars on the road, decreasing traffic congestion and transportation energy consumption. It would eliminate the question of enforcement and its assorted costs. Further, free service would disproportionately assist Montgomery County’s most needy residents and visitors. It would help the County recover from the devastating economic effects of the COVID-19 pandemic, which has left many thousands of our neighbors unemployed or barely getting by.

In short, the cancellation of the fare-evasion solicitation, an immediate end to police referral of fare evasions that are not accompanied by violent crime or the threat of violent crime, and free bus service would have enormous benefits for the County and its residents.

Thank you for your attention to this matter.

Of 10 regional transportation-improvement options designated last summer by the National Capital Region Transportation Planning Board for further study, the clear worst is an additional Potomac River bridge + Montgomery County highway corridor. Add that such a project would be hugely expensive and environmentally destructive, cutting a swath across Montgomery County’s Agricultural Reserve.

The image here is from the Long-Range Plan Task Force: Draft Analysis Results, available at https://t.co/Fs9qBlhIAD. 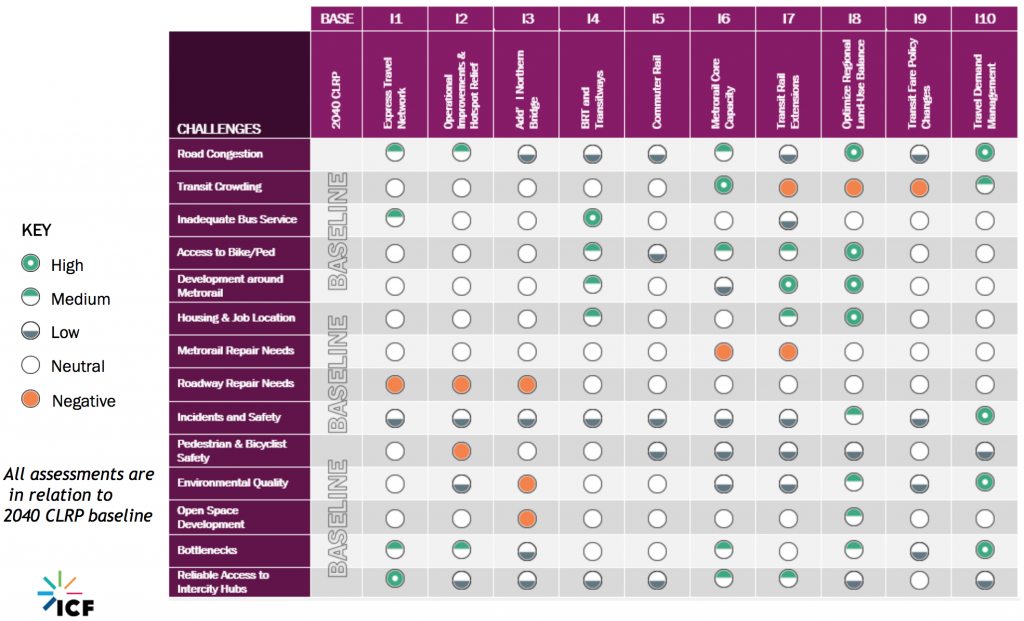 I’m glad Montgomery County (http://www.montgomerycountymd.gov/COUNCIL/Resources/Files/res/2017/20170718_18-870.pdf) and the City of Takoma Park both voted to oppose consideration of this option, and thanks to the Montgomery Countryside Alliance and the Coalition for Smarter Growth for their advocacy. 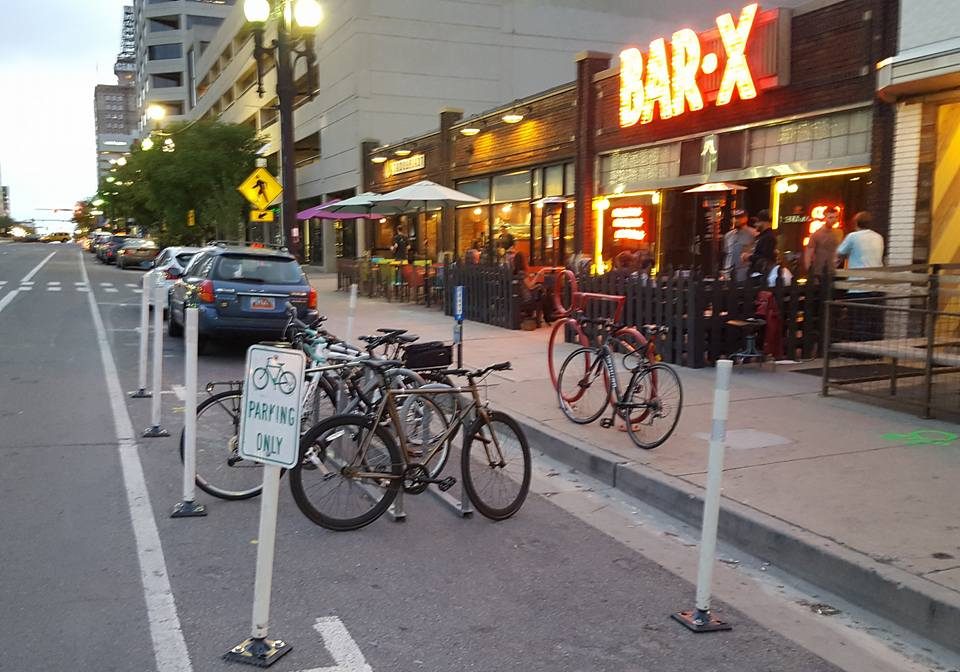 For me, a light went on after I made a mistake. I had pushed bicycling infrastructure as a member of the Takoma Park City Council, but when we brought Bikeshare stations to the city in 2013, I was too quick to accept staff-recommend station locations. I voted to allow a station to be placed in a community gathering space, 250 feet distant from the center of one of Takoma Park’s business districts, rather than in a much better spot: a couple of sheltered curb car-parking spaces right at a commercial cross-roads. My lack of awareness reflected an outdated attitude toward road space, an attitude that prioritizes preservation of underutilized road-space over much-needed people-space. I now realize that parking matters, as much for bikes as for cars.

Another light went on as I read the Bicycle Facility Design Toolkit, published last month (July 2017) by the Montgomery County Planning Department. The document, a component of the county’s Bicycle Master Plan, contains 49 instances of the word “parking,” each associated with motor vehicles, describing bikeway positioning in relation to on-street car parking. There’s nothing in the design toolkit about the location of bike parking.

There is a lot to like in the bike plan. It’s a major achievement, a guide to building out the “multi” in our aspired-for “multi-modal” transportation network. As realized in the years to come, it will boost alternatives to car trips, easing congestion, good for the environment, good for public health.

Yet the plan’s disassociation of bike parking from bikeway options seems a glaring omission.

In November 2015, the Takoma Park’s Safe Roadways Committee recommended relocating the Old Takoma station. The SRC’s reappraisal noted, “A number of cities, including Washington, D.C., New York City, Pittsburgh, Boston, and others, use some curb parking spaces for bike parking, including Bikeshare. Safety concerns are easily answered: Car drivers already walk unsheltered in the street to enter and exit their vehicles much like a Bikeshare rider would do.” The SRC recommended relocating the city’s Urban Park station from its spot near the edge of the business district to one centered within one block of a majority of businesses, to a spot that is “both highly visible and symbolically important, marking a repurposing of two car-parking spaces to instead house 15 docked bikes.”

How would this work? Consider two now illustrations, from Santa Monica, California and from Washington, DC. Note how these cities have reclaimed vehicle space for bike infrastructure, for bike parking – bike share stations in this case – directly adjacent to on-street bike lanes.

You can find many, many more examples, via a Web search, of curb-lane situated bike share stations. Here are some.

The curb lane can be a suitable place for personal bike parking too. Witness shots I took in Denver and Salt Lake City, again with on-street bike lanes.

What do we actually see, here in Montgomery County? A couple of snaps I took in downtown Silver Spring and tweeted – and yes, I drink a lot of coffee…

Of course, many county locations do offer bike parking, although too few. That judgment applies both to streets and to private parking lots including, I’ll report anecdotally, most shopping centers. And when there are shopping-center racks, they’re typically off in a distant corner.

The Bicycle Master Plan public comment deadline was July 15. I missed it by a month. Nonetheless, I ask the Planning Board to direct staff to cover bike-parking location in the Bicycle Facility Design Toolkit. As a bicyclist, I know that safely and conveniently located bike parking is an essential bike-infrastructure element. And as an urbanist, I know that public spaces should be for people and not for vehicles. Let’s repurpose existing parking, including curb parking spaces, for designed-for-safety bike share stations and bike parking. 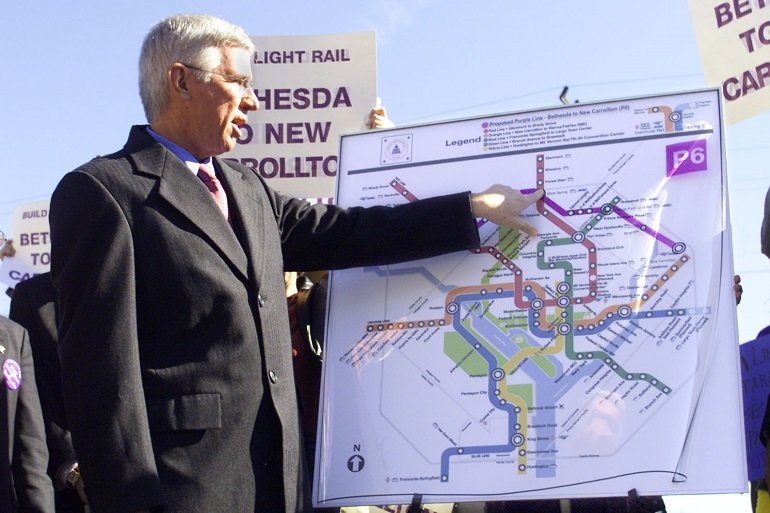 Excerpting from am article in Governing, “What Judges Don’t Understand About Transportation”:

“NEPA [the National Environmental Policy Act] was enacted in 1970, at a moment when environmental activists were giddily enthusiastic about their ability to produce a cleaner planet through federal regulation… It wasn’t meant to be a statement of transportation policy, and for most of its early history it wasn’t that… And so we come to 2017, and the strange case of Maryland’s Purple Line project…

“The whole case provides glaring evidence of how years and millions of dollars can be wasted arguing about projections that can’t possibly be made with even a shred of confidence… Whether or not to build the Purple Line is a question for the democratic process — for the citizens we elect as legislators and appoint as managers. Reasonable people will differ on it. But when a judge hijacks the whole issue and issues rulings on spurious legal grounds, he undermines public trust in the judicial system.”

Read the full article at http://www.governing.com/columns/assessments/gov-transportation-judges.html.