The 2018 election was good for the Democrats nationally although Maryland results were pretty much status quo. My own focus is local however, on Montgomery County, so let’s look at the numbers here in Maryland’s largest county. I draw four conclusions…

Contrast with 2014, when incumbent Democrat Ike Leggett won a third term as county executive with 65.3% of the vote to Republican Jim Shalleck’s 34.2%.

This year, the non-Democrats’ votes, Floreen’s and Ficker’s, total 35.6%. Compare to Republican Shalleck’s 34.2% in 2014. The difference is a mere 1.2 points. Trump-era Democrats’ stayed true to their party, and Nancy Floreen split the Republican vote, not the Democratic! 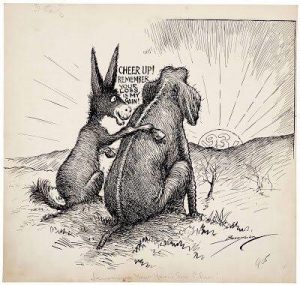 Marc Elrich maxed out on public-finance matching funds, receiving $750,000 in public money for the primary and $750,000 for the general election, given support from over 3,600 donors who contributed $150 or less. Nancy Floreen’s campaign had 685 donors, less than one-fifth Elrich’s count.

It’s said that “yard signs don’t vote,” but donors do, and given their campaign equity, they tell their friends about their candidate. A public-finance candidate must build a substantial donor-voter base in order to receive matching funds. To max out, the candidate must go wide by raising from diverse geographic, cultural, and age demographics and interests.

Yet Floreen stayed narrow. Montgomery Neighbors PAC found that “87.5% of the total funds raised in support of Nancy Floreen’s campaign,” direct to her campaign and to the County Above Party Super PAC, “comes from one industry – land developers, financiers, builders, apartment managers, service providers, and commercial and residential real estate agents.”

Public finance worked by providing Elrich both the funds he needed to win and an incentive to go wide. Floreen stayed narrow and lost.

Both Marc Elrich and Nancy Floreen are long-time local electeds with oversize personalities. They have equal presence. It’s party and positioning that explain Elrich’s victory over Floreen. The perception that Elrich cares about everyday people contrasts with Floreen’s perceived pro-developer bias.

Why didn’t Democrats similarly back Ben Jealous? He and Elrich are cut from the same progressive cloth, yet in Democrat-dominated Montgomery County, Jealous scored only 54.5%, lagging Elrich by 10.8 points.

Jealous’s Maryland association was simply too weak. He lacked local presence, coming across as a movement guy more than as someone you’d look to craft a workable state budget. His scant state voting record didn’t help, and his involvement in the Maryland marriage-equality fight was peripheral. So most Marylanders were introduced to Jealous as a Bernie guy, which gets you only so far. Bernie Sanders did show up for his 2016 state campaign chair, saying “I am proud to be here because Ben is one of those leaders who is not going to be nibbling around the edges, but understands we have got to transform the economic and political life of this country.”

I suspect that most Marylanders — the state overall voted 56% for Hogan and 43% for Jealous — wanted a first-term governor, if Jealous, who they could be confident would focus on the state first. Fine for incumbent Maryland Attorney General Brian Frosh to spend time going after Donald Trump. Frosh is a Montgomery County native who has served the state well, and he earned 77.8% of the county’s vote this year. Going back to 2014, Democratic gubernatorial candidate Anthony Brown was well known as then-Lieutenant Governor and won in Montgomery County over Hogan 61.7% to 36.9%. Both Frosh and Brown in 2014 possessed the presence that Jealous lacked, the voter’s sense that the candidate is in it for the long haul for us.

Progressive Marc Elrich earned only one percentage point fewer votes than centrist incumbent Ike Leggett did in 2014. This fact should give pause to anyone thinking of challenging Elrich from the center in the 2022 Democratic primary, whether that person is a business figure (David Blair’s positioning in this year’s primary) or a known political quantity, say a term-limited councilmember. Then again, one of those latter figures could make a compelling 2022 candidate for statewide office. Let the positioning begin!