Reporting vote percentages in multi-representative races can be tricky. If you compute a candidate’s vote percentage relative to the number of votes cast, you get a really misleading figure. A small point: but there’s a better way.

It’s important to understand vote percentages as we evaluate Ranked Choice Voting, a system that allows voters to rank as multiple candidates in order of preference. RCV, currently before Montgomery County’s Maryland state legislative delegation as bill MC 29-19, ensures that an elected candidate was chosen by a majority of voters and not just a plurality. 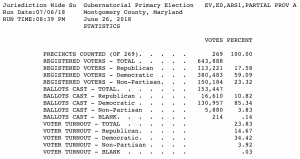 Let’s look at the 2018 Maryland Democratic primary. Thirty-three candidates ran for four at-large Montgomery County Council seats. (I was one of them.) Each voter could choose up to four candidates.

At the December 17 delegation hearing on MC 29-19, an individual offered the primary winners’ vote percentages in his supporting testimony. The numbers he offered are deceptive because each voter could vote for up to four candidates, and in fact 437,616 votes were cast, by 130,957 Democratic voters, an average of 3.34 votes per ballot. So while the top vote-getter, Hans Riemer, won 12.21% of the vote – seemingly far, far from a majority – he also won 41% of the voters, that is, not so far off. The picture with conventional voting isn’t quite so skewed as this testimony suggested!

And the gap between Gabe and the #5 vote-getter, Marilyn Balcombe, who won 6.26% of the vote, was not a mere 1.12 percentage points. Based on the number of ballots, it was a 3x wider 3.76 percentage points. Marilyn was chosen on 20.9% of the ballots cast. Not bad!

It’s hard to say how RCV would have affected the 2018 at-large primary outcome. With RCV, as lower vote-getters are eliminated, lower-ranked choices on ballots that listed them are counted. Maybe the additional votes would have boosted Marilyn or another candidate into the top four. It’s hard to say.

Much more likely RCV would have changed the outcome in the other 2018 Democratic primary contests, in Montgomery County races and many state legislative races, for instance in District 16, where only 12 votes separated the #3 (winning) and #4 (runner-up) candidates for the district’s three seats in the Maryland House of Delegates. MC 29-19 only covers Montgomery County races, however, and not Maryland state races. I support it and hope it will pass – if you agree, please tell your state legislators – and that the State of Maryland will embrace Ranked Choice Voting in time for the 2022 primaries.

RCV democratizes elections by empowering minority candidates, including in multi-representative races. RCV establishes a new way to count votes, so numbers are critical in any objective evaluation. Just remember to measure percentages relative to the number of ballots cast. A small point, but significant in understanding multi-rep race outcomes.